Did you know that India is home to 70% of the Tiger population in the World?

Yes! We are a land of  Tigers. According to NTCA, we are home to 2,226 Tigers. And the good news is there an increase in the number compared to the last survey.

Among the Indian states, Karnataka is home to more than 400 Tigers & is the highest by population in the country followed by Uttarakhand & Madhya Pradesh.

In Karnataka, Bandipur & Nagarahole Tiger Reserves constitute the majority of Tiger population in the state.

Nagarhole Tiger Reserve is part of the Nilgiri Biosphere Reserve and has a healthy tiger-predator ratio with Indian bison and elephants.

The park ranges the foothills of the Western Ghats spreading down the Brahmagiri hills and south towards Kerala state. It lies to the north-west of Bandipur National Park. The Kabini reservoir separates the two parks. Elevations of the park range from 687 to 960 m (2,254 to 3,150 ft). It is 50 km (31 mi) from the major city of Mysore.

The Kabini dam submerged large tracts of forest creating a huge lake, parts of which are within the national park. During the dry season when the lake dries out, it leaves only the main river visible and the resulting open plain creates an abundance of fresh grass. This microhabitat provides fresh grass when the rest of the park is drying out and it plays host to large herds of elephants and other creatures of the forest, all easy to see. 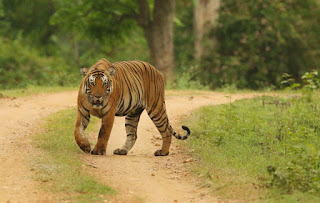 Tourists & Wildlife Enthusiasts from around the world throng Nagarhole during weekends. There are very less  budget accommodations in Nagarhole.

Here are a few accommodations in Nagarahole:

For any other bookings, get in touch with Easy Vacations